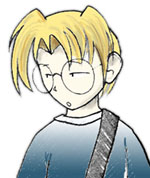 Anime nut, Shoujo freak, and Gal game fanatic, graphic artist, good at drawing cute girls, skilled with Photoshop. Semi-fluent in Japanese, but since everything he learned he learned from Anime and Games, he tends to talk like a 15-year-old Japanese girl and doesn't realize it. Even though he has a sarcastic wit and doesn't appear to be bothered by much, he is very sensitive and shy, and his feelings are very easily hurt. He can win any girl in any game, his skillz are so sharp he can even win the impossible ones - yet his real life relationship skills are actually worse than Largo's. The only non-Japanese game he is good at is Quake 3, where he is very capable of kicking Largo's ass (some of this he attributes to his cutequakegirl model). He sucks at any other FPS. He says he only plays pure love dating sims, but for some reason he has pretty extensive knowledge of H games (or Japanese games that allow scoring with girls) as well. 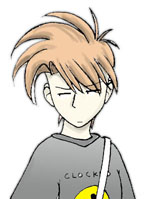 Ultimate l33t gamer/h4x0r and a master at any and all FPS games, role-playing games, MMORPG games, fighting games, and even old obscure arcade games. Piro's abilites with Quake 3 is a stinging thorn in his side. He does something for a living, not that it really interests him. He is very excitable, and never engages his brain before shooting off his mouth. He has a proclivity for getting physically hurt, and has developed a high threshold for pain. Legendary for his lack of talent dealing with women, something he deems not worth working on because it would take away from his gaming time. Keep away from fire. He has a tendency to drink too much and has developed a taste for Ebisu beer.

Piro's friend in Tokyo. Tsubasa is friendly to a fault, and just a general all around nice guy. He too is a huge gal game fan, and also isn't as innocent as he tries to make himself out to be. His English is very good, but not perfect. He is always cheerful, but there are times when we get to see a little deeper into his character. Not everything is always OK with him - and there are many times that he bites his tongue because he is so polite.

Dom is a crazed, maniacal Sega employee. He is armed and dangerous. No one is quite sure what Dom does for Sega, but whatever it is, it gives him a permit to carry. Ed is Dom's arch rival or Dom's best friend. Not sure. Does he work for the Evil Sony Empire? And what is with his preference for large-gauge shotguns?

Erika and Kimiko are roommates and have a fairly nice place with one bedroom that they share. Erika is a neat freak, but Kimiko is a little disorganized. Erika is a rather solid individual who enjoys a certain amount of variety in her life. She has a knockout figure and looks, which she uses when it suits her to make money, either doing boothbabe gigs or modeling for gaming companies like Temco to help them perfect 'bounce algorithms' and whatnot. Kimiko is a struggling voice actress who wants more than anything to be a successful voice actress in a famous shoujo anime, and perhaps even in a big movie someday. She is cute, thin and a little underdeveloped, which makes her a bit self-conscious. When not trying for voice jobs, she is a waitress at Anna Miller's, a restaurant chain in Japan.

Seraphim is a representative of Piro's conscience. She appears as a little angel-like character, complete with wings and long wavy hair. She finds her job makes it very hard for her to quit smoking. Piro doesn't have a 'bad' side to his conscience - Seraphim takes care of both duties (budget cuts). She does more to comment on Piro's goof-ups than to help him. Oddly enough, she looks like she could be in a Squaresoft game. 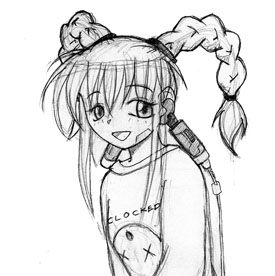 Ping-chan has yet to appear in any of the comics, but all that is being said about her at this time is that she is a PS2 accessory. When she is introduced in the strip, suffice it to say she is going to add quite a bit of chaos to the lives of Piro and Largo.